Is this a West Pointer who went on to serve in the Civil War?

The subject of this ninth plate Daguerreotype is a clean shaven young man who wears a jacket that suggests he is a military cadet. The jacket is adorned with dark trim and smooth brass buttons, which is very similar to those worn by West Point cadets during the antebellum period.

In the middle of his cravat is pinned what appears to be a fraternity pin, which supports the theory that he is a cadet. The gent also wears a felt hat with leather visor.

The brass mat is stamped “Tyler & Co.” According to the late John S. Craig of the Daguerreian Society, evidence suggests that the company operated studios in Boston, Providence, Memphis, Cincinnati, Charleston, and New Orleans. This image was recently discovered at a flea market in South Carolina, which may indicate that this Daguerreotype originated in a Southern studio.

Estimating his age to be about twenty, and the photograph dating to 1855, this man would have been in his mid-twenties when the Civil War began. Assuming he was alive at the time, it is reasonable to assume he enlisted in the Union or Confederate army.

My brother Gary recently found this photograph at a flea market in South Carolina, purchased it at a very reasonable price, and sent it my way. He’s always on the lookout for quality images, and I appreciate his keen eye! 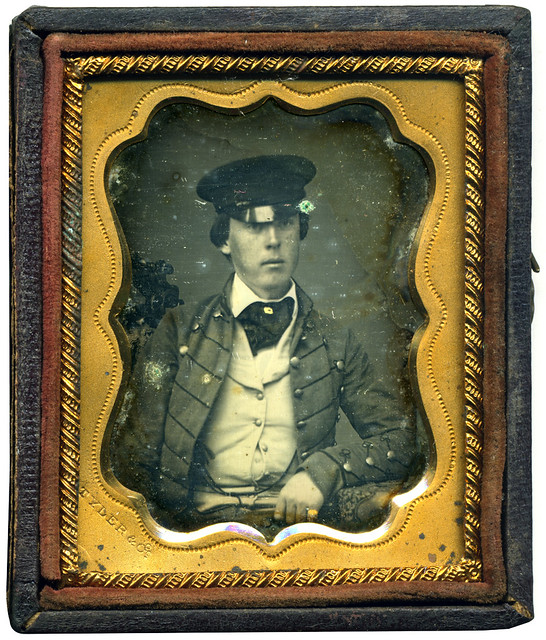