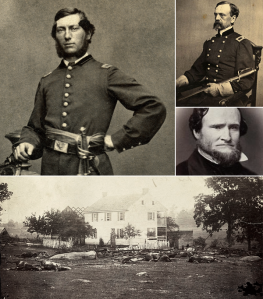 The exploits of Col. Joshua Lawrence Chamberlain and his Twentieth Maine Infantry at Gettysburg are well known among those with an active interest in the Civil War. Far less known however is the story of another Maine unit, the Sixth Battery, First Light Artillery, and its role in stopping the Confederate juggernaut in the vicinity of the Peach Orchard about the same time Chamberlain and his troops were fighting nearby on Little Round Top.

The story of Lt. William H. Rogers and the rest of his battery at Gettysburg is the subject of my latest “Faces of War” column in the Civil War News.

The fighting in the vicinity of the Peach Orchard during the second day of the Battle of Gettysburg was a Union artilleryman’s nightmare. Advancing Confederates had torn into the poorly positioned Union Third Corps and ripped it to shreds. The destruction of the federal line at this critical point uncovered a wide a dangerous gap in their front. Onrushing rebels plunged into the void and drove shattered ranks of federal infantry back, leaving artillery batteries unsupported and exposed.