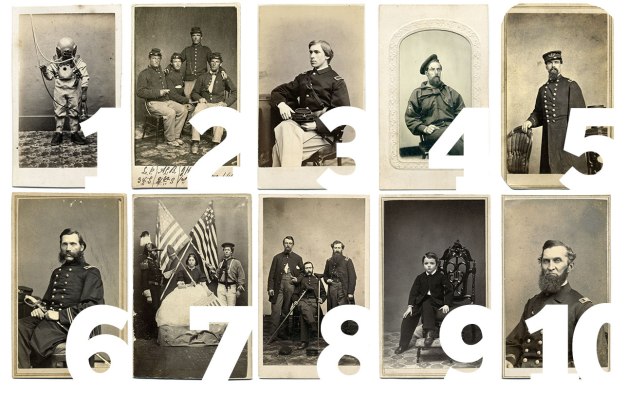 A carte de visite of a Civil War era deep sea diver was the most popular photograph posted to my Flickr photostream this year. A review of the data in Flickr’s interestingness feature revealed that it led the next most popular image, four sergeants from Company G of the Sixteenth New York Infantry, by more than a two-to-one margin.

Nine of the ten most popular were Civil War themed portraits, or 90 percent. Civil War military men composed 80 percent of all images posted in 2014 (37 of 47). The other images were portraits of civilians and other non-military subjects.

1. Deep Sea Diver
Carte de visite by an anonymous photographer. An individual wearing a Morse Diving Helmet and an insulated suit stands in a photographer’s studio. A modern pencil identification on the back of the mount of this image names this diver as “Hyde,” and is associated with a tintype of a man in the uniform of a Union sailor. According to a previous owner, the sailor’s first name is George.
See full image.

2. Ranking Sergeants of Company G
Carte de visite by an anonymous photographer. The Civil War was two months old on June 24, 1861, when these New Yorkers left their camp in Bethlehem, N.Y., and posed for their portrait brandishing weapons and an air of confidence. 3rd Sgt. Luther Lee Partridge, 4th Sgt. Andrew Christie Bayne, 1st Sgt. John Henry Austin, and 2nd Sgt. Edwin O. Betts all served in Company G of the Sixteenth New York Infantry, and they had mustered into the Union army a month earlier at Albany. All four men resided in De Peyster, a hamlet located in the far north of the Empire State. Although each man held the rank of sergeant, none had yet received the chevrons that denote their rank.
See full image.

3. Among the First Union Officers to Occupy Richmond
Carte de visite of Patrick Tracy Jackson Jr. by Whipple of Boston, Mass. According to a sketch of his life, Jackson, “Accepted a commission as First Lieutenant in the Fifth Mass. Cavalry (colored). After spending some time in guarding rebel prisoners at Point Lookout, Maryland, the regiment was sent to the front, and was one of the first to enter Richmond.”
See full image.

4. Navy Man “Hyde”
Tintype in a carte de visite mount by an anonymous photographer. A sailor identified in modern pencil on the back of the mount of this image only as “Hyde” is associated with a carte de visite of a man outfitted in a Civil War era deep-sea diving suit, his head and face covered with a Morse Diving Helmet.
See full image.

5. Famed Master of the Cumberland
Carte de visite of William Pritchard Randall by Washburn of New Orleans, La. Randall’s obituary, published on February 22, 1904, in the San Francisco Call recaps his eventful life: “Commander William P. Randall, U.S.N., retired, died at his home in this city to-day, aged 71 years. Assigned as acting master on the frigate Cumberland during the Civil War, he participated in the battle with the Merrimac and was credited with having fired the last shot from the frigate before she was sent to the bottom. After the war he entered the navy as ensign and served in various capacities until 1882 when he was retired. During the Spanish war he served as executive officer of the receiving ship Wabash.
See full image.

6. Escorting Gen. Sherman on the Silver Cloud
Carte de visite of William Henry Hathorne by R.A. Miller of Boston, Mass. Maine-born Hathorne was appointed an acting assistant paymaster in the spring of 1863. Ordered to the Mississippi Squadron soon after, he served a stint on the Silver Cloud. Hathorne was present for duty on the vessel in January 1864, when the ship and crew carried Maj. Gen. William T. Sherman on a trip from Memphis, Tenn., to Vicksburg, Miss.
See full image.

7. Preserving the Honor of Lady Liberty
Carte de visite by C.M. Pierce of Leominster, Mass. Columbia, or Lady Liberty, sits atop a podium trimmed with material on which is painted or sewn stars and an eagle with wings outstretched. She holds above her head a liberty cap hung from a pole, the traditional symbol of freedom that dates before Roman times. She also holds the shield of the United States, which represents defense, military strength and nationalism. Lady Liberty is flanked by representatives of the Union army and navy. Each holds a staff trimmed with ribbon, to which is attached the Star-Spangled Banner. The flags are crossed to provide a backdrop for Columbia, who they have pledged to defend.
See full image.

8. Injured Union Cavalryman Flanked by His Comrades
Carte de visite by W.R. Phipps of Lexington, Ky. A federal officer with a bandaged foot sits with a pair of crutches. He’s flanked on either side by his comrades.
See full image.

9. Boy with Ornate Chair
Carte de visite by O.A. Taft’s Gallery of Middlebury, Vt. A young man with a slightly furrowed brow sits on the edge of an ornate chair with his foot perched upon a small stool. Visible behind the chair is the base of a brace, which the photographer or an assistant has wrapped in material to conceal its protruding iron feet. Iron braces were used during the early period of photography to hold an individual in place while an exposure was being made.
See full image.

10. Lost at the Battle of Mobile Bay
Carte de visite of George Work by Charles D. Fredricks & Co. of New York City. A Connecticut-born trader in his mid-40s when he joined the Union Navy, Work was assigned to the monitor-class ironclad Tecumseh and went down with the vessel after it struck an underwater mine during the Battle of Mobile Bay on Aug. 5, 1864.
See full image.