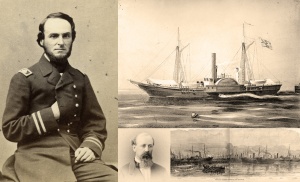 Francis Winslow hailed from the North and his wife and children from the South. When the war came he had difficult choices to make—and they ultimately cost him his life.

Navy Lt. Francis Winslow was between assignments and with his in-laws near Fayetteville, North Carolina, when secession tore the country apart in late 1860. The rift touched him personally. On the Northern side lay his home state of Massachusetts, and on the Southern side his wife, Mary, and their four children, three boys and a girl.