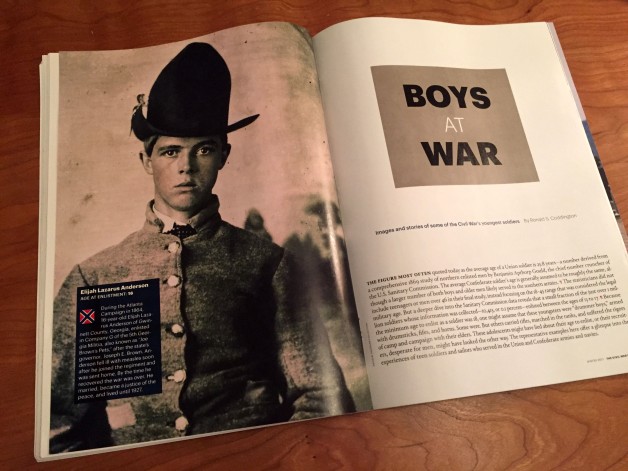 The latest issue of the Civil War Monitor includes my “Boys at War,” a collection of stories and original wartime images of teenagers between the ages of 13-17. Though these kids were not officially counted by post-war statisticians, they marched and fought alongside their elders. Their stories are forgotten and their faces lost in time—until now. 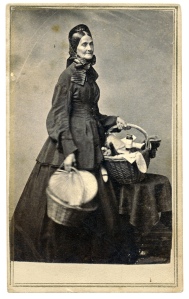 Please to announce that my next book in the Faces series will focus on nurses and other caregivers. I was inspired to take on this project after producing “Ministering Angels,” a gallery of original wartime portraits from the Chris Foard collection. The gallery appeared in the Spring 2015 issue of Military Images magazine (I am editor and publisher).
Pictured here is one of the portraits from the Foard collection. Almira Newcomb McNaughton Lockwood Fales, a native of New York who was twice widowed, accompanied her third husband, Joseph T. Fales, to the nation’s capital, where “as early as 1860, from her extended knowledge of Southern feeling and action, she foresaw and predicted the struggle.” After war broke out in earnest, Fales dedicated herself to the care of wounded and sick boys in blue, and was present at a number of battles including Shiloh, Fredericksburg and Chancellorsville.
I am now searching for original, wartime, identified ambrotypes, cartes de visite and tintypes of caregivers. I am not seeking to purchase, simply to get high-resolution scans. You’ll receive credit and a complimentary copy of the book.
Please contact me if you can help. 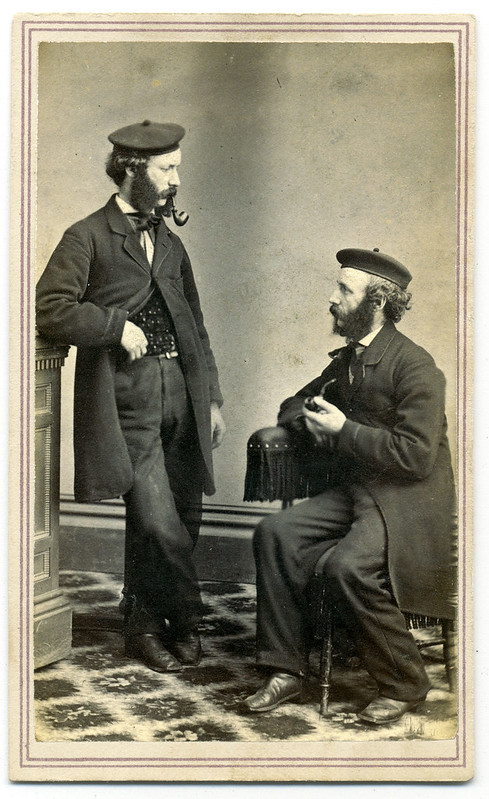 The story of James William Landon of the 5th Iowa Cavalry is the subject of my latest New York Times Disunion post. An excerpt:

“During the daytime we hid in the brush and swamps and during the night we would travel,” Landon explained. “About five days of this kind of retreat elapsed when I was wounded by a rebel. We were crossing over a ridge pursued by four men in rebel uniform. They were anyhow four hundred yards behind when one of them fired the shot that wounded me. Though we knew that the enemy was after us we did not know that they were so close until the report of the gun was heard.” 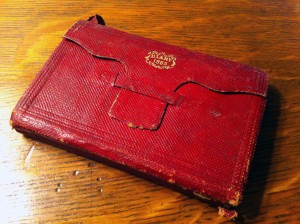 Today I will be visiting the offices of the National African American Museum of History and Culture in Washington to deliver the diary pictured here. It was kept by 2nd Lt. John Freeman Shorter in 1865—his last year with the 55th Massachusetts Infantry and the last of his life. Shorter, who is descended from Elizabeth (Betty) Hemings, through her daughter (and Sally Hemings’s sister or half-sister) Betty Brown, died of disease a few weeks after he returned to his home and fiancé in Ohio.

I spent three months working on the diary, with the help of my wife Anne and several friends who were truly generous with their time: Julie Baker, Susan Sukys Evanko and Phyllis M. Sukys. The transcription would not have been completed without their efforts.

The diary was purchased by Tom Liljenquist earlier this year at a Civil War show. He and I will make the visit to the Museum to formally donate the precious volume today.

Shorter was in a South Carolina hospital recovering from a crippling foot wound he suffered at the Battle of Honey Hill, S.C., on November 30, 1864. His daily entries record visits by comrades, friends and dignitaries including Martin Robison Delany. Shorter describes his recovery, notes wounded and sick soldiers from Sherman’s army arriving at the hospital during the march through the Palmetto State, the surrender by Gen. Lee of the Army of Northern Virginia, and the assassination of President Lincoln.

Each entry averages 30-35 words, and starts with a description of the weather before noting details of the day. Shorter does not share his feelings, and I can’t help but wonder if he intended someday to write a memoir of his wartime experience with this diary as a reference to remind him of day-to-day activities.

His last full entry was recorded on Friday, September 22, 1865. It is a typical entry, lacking punctuation and capital letters:

the morning clear and
pleasant quite a
number of the Officers
went to Boston on
business, nothing going
on on the Island
worthy speaking
is written a letter
to my Father
reported that the
paymaster is by
command Paying off the
Regiment in the
morning

This sketch of his life and service appears in the regimental history, Record of the service of the Fifty-fifth regiment of Massachusetts volunteer infantry:

John Freeman Shorter was born in Washington, D.C., in the year 1842. His father was for a long time messenger in the United-States Senate. At the time of his enlistment, Lieut. Shorter was working as a mechanic in Delaware, Ohio. With few early advantages, he had acquired by hard study a good English education. In the spring of 1863, hearing of the organization of the Massachusetts regiments, he left home, and joined the Fifty-fifth Massachusetts, then recruiting at Readville. June 24, 1864, he was appointed First Sergeant of Company D. In this position, he proved himself to be an excellent Orderly. Quiet, reserved, modest, he yet held his company in the firmest control. With every soldierly quality, from scrupulous neatness to unflinching bravery, he well merited the reputation of the best non-commissioned officer in the regiment. As such, he was selected for the first promotion from the ranks, and was commissioned as Second Lieutenant by Gov. Andrew, March 24, 1864. The department commander (Brig. -Gen. John P. Hatch) refused him a discharge as Private and muster as Lieutenant, because ” men of African descent could not be commissioned in the United-States Volunteers ! ” While occupying the anomalous position of an officer commissioned and not yet mustered, he was wounded in the foot, at Honey Hill, S.C., Nov. 30, 1864. By this wound he was so severely crippled, that, when the Secretary of War finally decided to recognize colored line-officers, a special order was necessary to authorize his remuster. Notwithstanding this wound, he continued on duty with the regiment after returning from the hospital, and was finally mustered as Second Lieutenant, July 1, 1865. When the Fifty-fifth returned to Massachusetts, he accompanied them, and was discharged with his company, Aug. 29, 1865. He set out directly for Delaware, Ohio, where the young lady resided to whom he was engaged to be married. On the way, he was exposed to the contagion of the small-pox, which his constitution, weakened by wounds, could not resist ; and, soon after arriving at his destination, he died of varioloid.

The officers and men of the regiment will retain him in very pleasant and honorable remembrance. In person he was tall, of muscular build, with head carried a trifle forward, hair light, complexion almost white, and blue eyes, whose lively expression brightened a face otherwise somewhat grave. He was very reticent ; but his few words were crisp, earnest, and to the point. A thorough soldier and a thorough man, he earned and worthily filled the grade to which he was promoted, and amply justified the friendship of the officers of the regiment and the State authorities of Massachusetts, who had urged upon the United-States Government the justice and the policy of the final recognition of the rights of his race, implied in opening to them promotion from the ranks.

This weekend Dave Neville (pictured, right) and I signed an agreement to finalize my purchase of Military Images magazine. Today I am delighted to share the news with all of you. MI was founded in 1979, and since then has enjoyed a long tradition of excellence in bringing to light rare military portrait photographs. Key to success has been the contributions of collectors, and I’ve been in contact with many of them to continue their relationship with the magazine.

My wife, Anne, will play a major role in the magazine, and I am grateful for her love and support. I simply could not take this responsibility on without her.

Here is the press release posted on social media today:

ARLINGTON, Va. — Historian David Neville has called it quits after a decade at the helm of Military Images. Neville, who has owned and edited the publication since 2003, sold the magazine to Ronald S. Coddington of Arlington, Va., in early August.

Coddington, who is familiar to Civil War News readers as the author of “Faces of War,” takes over as publisher and editor immediately. “Military Images has a long tradition of excellence in bringing to light rare military portrait photographs, and I am thrilled and honored to have the opportunity to guide MI to the next chapter in its life,” reports Coddington. He adds, “The magazine continues to play a key role in preserving the visual record and stories of citizen soldiers in America, and is a key source for information about uniforms and other aspects of the military. In the current digital age, with so much new material surfacing, it is more important than ever to have a publication that showcases and interprets these important images.”

Harry Roach founded the magazine in 1979. He set a mission to document the photographic history of U.S. soldiers and sailors from the birth of photography in 1839 through World War I, although the vast majority of published images date from the Civil War period. Roach sold the magazine in 1999 to Philip Katcher, from whom Neville purchased it four years later.

Regular contributors to MI include some of the most respected and knowledgeable collectors in the country, including Michael J. McAfee, John Sickles, Chris Nelson, David Wynn Vaughan, Ron Field, and Ken Turner.

“I’m excited to continue working with all of our contributors, and to invite new faces with a passion for military photography to participate,” notes Coddington, who can be contacted at militaryimages@gmail.com or militaryimagesmagazine.com.