I’ve recently added this carte de visite by the noted Bendann Bro. of Baltimore, Md., to my collection. A clue to the identity of this group of women and a lone male is written in pencil on the back of the mount of this card photograph: “Carte de Visite of the celebrated demoiselles of Balto taken for Mr. Bueno of Cuba.” The surnames of the individuals are written in pencil along the bottom of the image, and are difficult to read: “Modle, Dr. Conick, Gegans, Alricks, Modle, Cary, Kempson, Meals, Deval, Alricks.”

A cancelled internal revenue service stamp on the back of the mount dates this image between September 1864 and September 1866. The federal government taxed photographs and other items during this time to pay for the Civil War.

The previous owner of this image speculated that they may have been prostitutes from a Baltimore brothel. 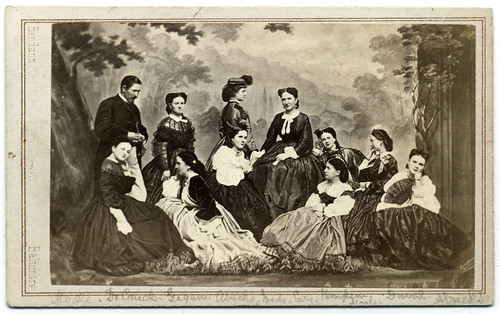