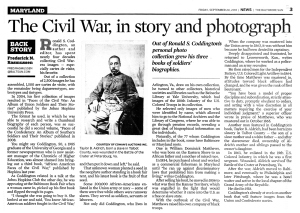 Fred Rasmussen, who writes the popular column Back Story for the Baltimore Sun, featured African American Faces of War yesterday. Fred attended my recent book talk at the Johns Hopkins Club, and I thoroughly enjoyed having he opportunity to meet him. Fred was born in raised in Dunellen, N.J., only a mile or two from my boyhood home in Middlesex.

An excerpt from Back Story:

Some 200,000 African-Americans enlisted in the Union army or navy — some of them were free while others were runaway slaves. They served as soldiers, servants or laborers.

Not only did Coddington, who lives in Arlington, Va., draw on his own collection, he turned to other collectors, historical societies and libraries such as the Beinecke Library at Yale University, which had images of the 108th Infantry of the U.S. Colored Troops in its collection, for instance.

He selected only images of men who were identified by name, which allowed him to go to the National Archives and the Library of Congress, where he was able to go through pension records, revealing a great deal of biographical information on the individuals.