“Orford Academy opened its doors in 1851. Tuition was $3 per term and some families paid with goods instead of cash,” notes Rivendell Trail History. “All students were expected to exhibit good moral behavior and attend church. Orford Academy, as a private school, closed its doors in 1871.The building remained empty until 1898. There were 14 students pursuing a high school degree in 1898 when the town took over the operations. After some difficult times, Orford High School opened up in 1926 as a teacher-training site for Plymouth and Keene State colleges. It began with just a sophomore and freshman class and added a class each year. It must have been an interesting experience for students as a new group of teachers arrived at the midyear mark. The only sense of consistency was provided by Ms. Gladys Twitchell, who served as the headmistress from 1926-1945. In 1949 the connection to Plymouth Teachers’ College ended, and the town debated whether to continue running Orford Academy as a town school or tuition students elsewhere. In 1950, the town voted to keep the high school and hired its first set of teachers.”

The Connecticut River Joint Commissions describes the old town section of Orford, N.H.: “The Historic District was the site of Orford’s first schoolhouse (1770), and two later schoolhouses (1785 & 1829, the latter being the only one of the three remaining, and now converted to a dwelling). Orford’s first Academy building (built 1796, burned about 1850) stood on the West Common. Unsuccessful as an Academy, it became a grade school where students as young as seven or eight wrestled with problems of Colburn’s Mental Arithmetic. A second Academy building (1851) is now the Orford High School. In 1898 the building was sold to the town and fitted out for a grammar school. It became the Orford High School in 1926. It stands on the southern end of the Ridge in the Historic District.”

This carte de visite was taken by A.F. Clough of Warren and Orford, N.H., and is new to my collection. It is available on Pinterest, Tumblr, and Flickr. 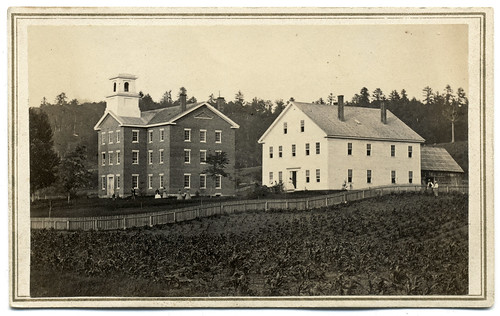