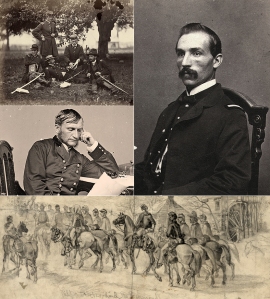 Samuel Tilden Kingston, an assistant surgeon in the Second New York Cavalry who accompanied his comrades on the ill-fated Kilpatrick Raid against Richmond, is the subject of my latest contribution to the New York Times series Disunion. Kingston rode with a 500-man column commanded by Col. Ulric Dahlgren, who was killed in action. Papers reportedly found on his body ordered the assassination of Confederate President Jefferson Davis and his Cabinet. Kingston fell into enemy hands when he remained behind with wounded troopers. He was sent to Libby Prison and condemned to death as a felon. An excerpt:

Dahlgren’s body, which had been unceremoniously dumped in a muddy grave near the place he fell, was disinterred and put on display in Richmond. “Large numbers of persons went to see it. It was in a pine box, clothed in Confederate shirt and pants, and shrouded in a Confederate blanket,” reported The Richmond Whig on March 8, 1864.

While this circus played out on the streets of the capital, Kingston and his white cellmates were informed that they had been condemned to death as felons for their role in the alleged assassination attempt. “This news appeared to have a very depressing effect on Dr. Kingston,” noted Lieutenant Bartley, a fellow prisoner.

Kingston’s cough and cold worsened, and he lost his appetite. On March 21, as he lay near death, the Confederates removed him from his cell and sent him North. He survived the trip home, and with good food and care came back to life. He eventually returned to the regiment, was promoted to full surgeon, and served in this capacity until the end of the war.