The gent standing is David B. Parker and his military service began like so many other young Northerners. In 1861 he enlisted as a private in his hometown company. It became part of the 72nd New York Infantry, shipped out to the South and joined the Army of the Potomac.

This is where the similarity to other soldiers ends. In June 1862, Pvt. Parker was detailed as a mail agent in his regiment’s division, which was commanded by Maj. Gen. Joe Hooker. He was appointed to handle the mail not because he was a poor soldier, but because he was a energetic and possessed a gift for cutting through red tape and making things happen. Before long Parker ran the entire mail service for all of the Army of the Potomac.

Thanks to Parker, mail delivery went virtually interrupted no matter where the army was—Gettysburg, Spotsylvania, the front lines of Petersburg and Appomattox Court House. The work he did kept up the morale of the men as the letters and packages from home flowed into camp literally without interruption.

His career after the war was stellar, including many years of association with most of the Presidents of the U.S. and Bell Telephone.

He died in 1910. Two years letter, his memoir, A Chautauqua Boy in ’61 and Afterward, was published. In it, Parker tells his story and includes anecdotes of the top Union leaders with whom he was associated, including generals George G. Meade and U.S. Grant, and President Abraham Lincoln. For example, here’s one I have not heard about Gen. Meade: “General Meade went to the Adjutant General’s office, which was a Sibley tent, and opened the flap to stoop and enter, as a soldier, who was building a fire in the stove and taking up ashes, was coming out. The pan of ashes struck General Meade’s breast and covered him. he showed a very irascible temper and cursed the soldier roundly. All that I saw of General Meade afterwards, however, was a reserved courtly gentleman. He was not personally popular with his staff officers, but no one could criticize his conduct or his patriotism.”

Parker, standing, is pictured here with Capt. Charles E. Scoville of the 94th New York Infantry. Another photo, from Parker’s memoirs, shows him in uniform as a lieutenant, the highest rank he obtained in the army. Officially he was acting assistant quartermaster for the Army of the Potomac responsible for mail delivery. 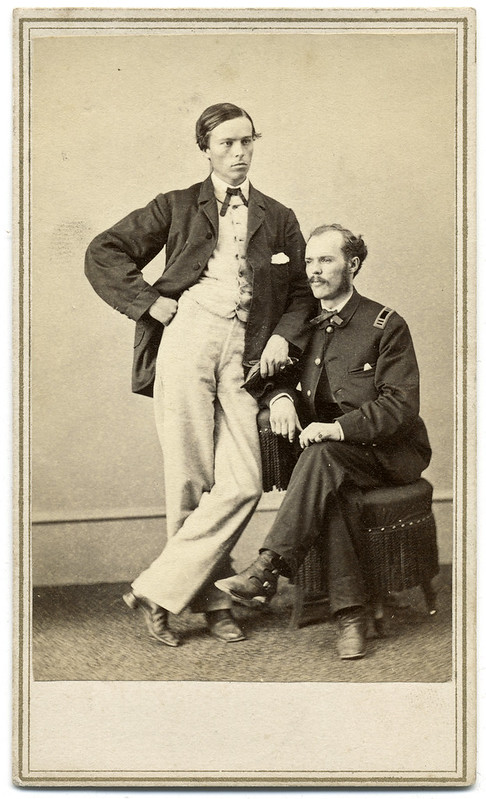