Union navy officer George Work and his crew mates on the monitor Tecumseh went into the historic attack on Mobile Bay full steam ahead—until an underwater torpedo ended in destruction and death.

“When nearly abreast of Fort Morgan,” reported two acting masters of the Tecumseh, “A row of buoys was discovered stretching from the shore a distance from one to two hundred yards. It being reported to Captain Craven, he immediately gave the vessel full speed and attempted to pass between two of them.”

The Tecumseh advanced on the rebel ram Tennessee, and turned to engage her. At this moment, 7:40 a.m., the hull of the Tecumseh struck a torpedo. The two masters recalled that the explosion occurred, “directly below the turret, blowing a large hole through the bottom of the vessel, through which the water rushed with great rapidity.”

Charles Mellen Rowe of Maine (1841-about 1915) started his Civil War service in October 1864 as an ensign on the ironclad monitor Naubuc. The vessel was so poorly constructed that she was deemed not seaworthy and converted to a torpedo boat. She and her crew never made it out of New York. Rowe’s brief navy career ended in August 1865. He settled in Newfield, N.J., after the war, married Adelia Hemingway, and became a farmer. 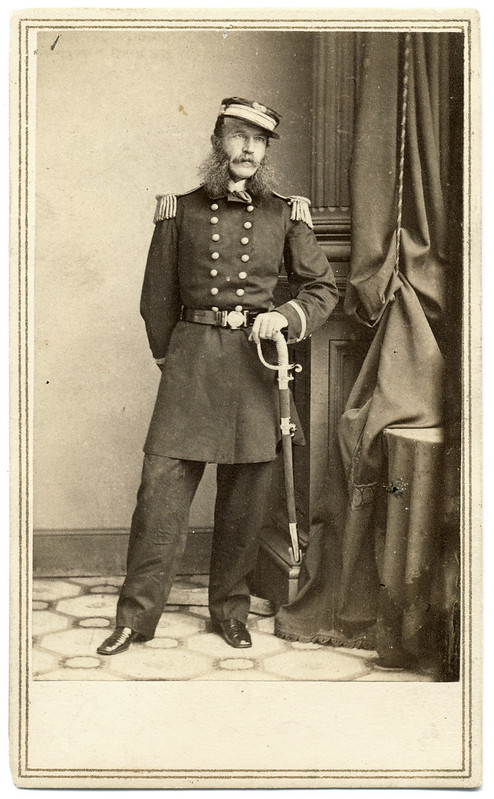 I am pleased to announce the fourth volume of my Faces series: Faces of the Civil War Navy: An Album of Sailors and Their Stories. I’ve spent the last few months contemplating how to follow my first three books, which document major soldier perspectives in the Civil War: Union volunteers, Confederate volunteers, and African American participants. And I’ve concluded that the fourth major narrative is that of men, black and white, who served in the navies.

My book proposal includes this excerpt, which details why I believe these long-overlooked sailors should be the subject of the next volume:

A fourth major narrative is lesser known. It traces the lives and military service of those who served on Union and Confederate vessels during one of the most exciting times in world naval history—the transformation from wooden to ironclad warships.

Similar to their counterparts in the army, these volunteers came from a variety of backgrounds and aspired to serve their divided nation.

Those who joined the Union navy would play a crucial role in fulfilling the Anaconda Plan. The ambitious strategy devised by Lt. Gen. Winfield Scott in 1861 proposed to conquer the Confederacy by controlling seaports and the Mississippi River in the seceded states. The importance that Scott, who commanded all Union forces until forced into retirement due to his age and disabilities, attached to naval strategy as key to winning the war is significant. The subsequent success of the federal blockade along the Atlantic coast and the Gulf of Mexico did as much to end the war as major battlefield successes. Historians continue to debate whether the turning point of the war in favor of Union arms was the Battle of Gettysburg (July 1-3, 1863) or the surrender of Vicksburg (July 4, 1863). The latter event effectively ended Confederate control of the Mississippi River.

Those who joined the Confederate navy were part of an effort to establish a fleet of warships with scant resources in the face of a well-equipped and organized foe. What the Southern navy lacked in men and materials, they made up for with innovative technology and improvised tactics. Witness the design and construction of the ironclad Virginia and the submarine H.L. Hunley.

I’ve started the search for images, including the above portrait of George W. Marchant. A native of Massachusetts, he served as an acting masters mate on the side-wheel steamer Augusta. Shortly after Marchant joined the crew in the spring of 1864, the Augusta was dispatched to protect California mail steamers under threat of attack by Confederate cruisers and passengers sympathetic to the Southern cause. The Augusta survived a perilous journey to Panama and back.

I could use your help. If you are aware of original, wartime, identified images of navy men up to the rank of captain, please be in touch!

Featured in the latest issue of The Civil War Monitor is “Faces of Gettysburg,” an album of images of soldiers from my collection and other sources, including my friend David Wynn Vaughan, the late William A. Turner, and the Museum of the Confederacy. I am delighted with the photo selection and design, and am grateful to Editor Terry Johnston and Creative Director Patrick Mitchell for their fine work.

I am genuinely impressed with the quality of the publication, and the effort that Terry and Pat have made to set the magazine apart from its peers. It is the most exciting new Civil War-related publication I’ve seen in years.