In 15 years of telling stories of Civil War soldiers and sailors, I’ve never come across a published poem that contained a reference to one of the men that I was researching.

That is, until now.

George Henry Boker’s 1864 Poems of the War includes “On the Cumberland,” an account of the dramatic events during the March 8, 1862, naval Battle of Hampton Roads, Va. The era of wooden warships ended that day when the Confederate ironclad Virginia destroyed the Union gunboat Cumberland.

The crew of the Cumberland fought like hell, and prompted Boker to write his poem. In it, he mentions the current subject of my research, William Pritchard Randall of New Bedford, Mass. By all accounts, Randall inspired all with his actions as the wounded wooden ship breathed her last. This excerpt describes Randall at his gun station. He’s credited with firing the last shot at the “Virginia”:

We reached the deck. There Randall stood:
“Another turn men,—so!”
Calmly he aimed his pivot gun:
“Now, Tenny, let her go!”

It did our sore hearts good to hear
The song our pivot sang,
As, rushing on from wave to wave,
The whirring bomb-shell sprang.

Brave Randall leaped upon the gun,
And waved his cap in sport;
“Well done! well aimed! I saw that shell
Go through an open port.”

It was our last, our deadliest shot;
The deck was overflown;
The poor ship staggered, lurched to port,
And gave a living groan.

Randall survived the battle, and along with George U. Morris, the acting commander of the Cumberland, became heroes. Randall is pictured here in a photograph taken in New Orleans about 1864. Randall remained in the navy after the war, and retired in 1882. He rejoined the navy during the Spanish-American War (1898) and died in 1904. 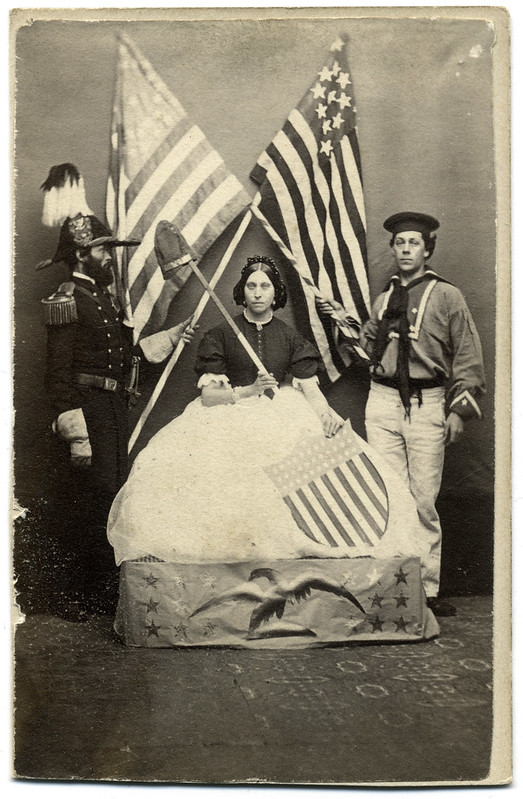